When Miss Mosey joined us, we knew there would be some modifications necessary in order to accommodate our life style and the cats. The previous owners had purchased her new and had some modifications done in Red Bay, Alabama where Miss Mosey was born. Those modifications were among the things that positively influenced our reason to have her join our family.

A prevalent theme will be horizontal surfaces, or the lack thereof. The physical size of the bathroom in a Phaeton 36 QSH is quite small. And as "psuedo" full timers we need to cram a lot of stuff in there. So we needed to either create more horizontal surface or make it so things didn't take up horizontal space. 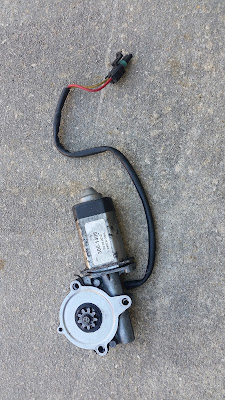 The Internet came to the rescue and soon we had a replacement motor in hand. Getting the motor off the step assembly was fairly straight forward, but installing the new motor was a bear. I had to use considerable force (insert crowbar here) to move the motor so the last bolt would go in place to secure it. The insult here though was that Coach Step would not send me the parts to take care of the recall that was in effect for these steps. They would only send them to an RV repair shop. Although after seeing the work some of them have done, I know I can do equal or better repairs in most cases. So being unqualified to make the recall repair, I opted to put it off until we got to Red Bay, Alabama and let the Tiffin factory do it. (Tiffin, I might add, had a bugger of a time with that third bolt also). 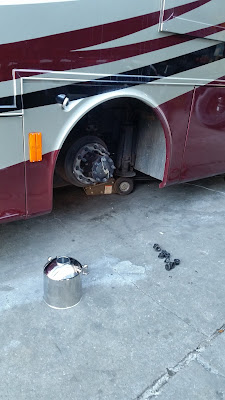 Before we left on any long trips one of the first orders of business was to replace the 5 year old tires. I had wanted to go with Toyos because of the reviews and price. But they were not available in the Northeast Florida area. So we went with Michelins instead. Several suggested that we join FMCA and use their discount. But our tire shop, Schnieder Transportation, said they could beat the FMCA price. And while the tires were off, we replaced the oem shocks with Bilstiens. We installed Bilstiens on our last motorhome and were happy with the results.

Our Phaeton came to us with a 50 amp plug in Surge Guard installed just prior to the transfer switch. I had a 50 amp hardwired Surge Guard that I wanted to install in its' place. When I started removing the old Surge Guard, this is what I found. 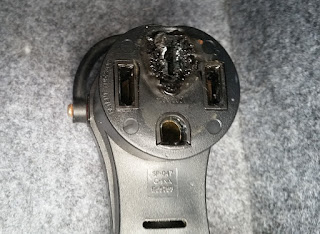 The neutral connection had apparently gotten very hot, hot enough to melt the housing of the 50 amp plug. This was part of the Surge Guard. 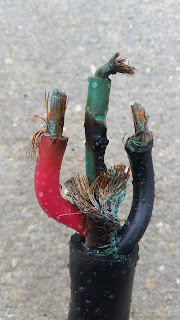 Even though I was no longer going to use the old Surge Guard, I was curious and dug in a little deeper. All of the wires had corrosion. That coupled with a not very tight connection is probably caused the overheated neutral leg in the plug. (Note to self, check electric connections at least annually). Glad we decided to upgrade the Surge Guard.

We installed solar on our last motorhome and really enjoyed the freedom it gave us. So we knew we wanted to install it on the Phaeton as well. We had to upgrade the batteries in the Phaeton as they were over 5 years old and required constant attention.

I really wanted to make the leap to Lithium or at least AGM batteries. So many evenings were spent researching and analyzing batteries, inverters and solar controllers. We looked online at the installations others had done. Technomadia, Wheelingit, Gone with the Wynns and others were closely reviewed.

I drew graphs, charts and made lists to try and convince myself that lithium was really worth it. Theoritically you can probably make the case that over the life cycles of the various battery types that Lithium is slighty cheaper or comparable per cycle. But there is still a steep upfront cost. But EJ reminded me that this is probably our "forever" RV and we should fix it up the way we really want to. So LiFePO4 it is!

After looking at several solar equipment suppliers we went with Starlight Solar in Yuma, Arizona to purchase our batteries. At the time I was a little skeptical of Battleborn and they were a little pricey.  Instead we chose to follow Technomadia's path and go with GBS brand batteries and Elite Power Systems battery management systems. They were a little less costly and had a good track record.

The old Lifeline batteries (6-6 volt batteries) had a total capacity of 660 amps (330 usable) and weighed almost 400 pounds. We chose to go with 400 amps of Lithium batteries which would give use between 320 and 360 amps of usable power depending on how conservative you want to be. The weight of the 4 lithium batteries is 140 pounds. And with our system we can pump one and fifty amps per hour back into those Lithium batteries. Try that with lead acid!

My major concern was freezing and overheating the new batteries since there was no space inside the Phaeton to install them, They would have to go in one of the compartments. We shouldn't get caught in weather extremes, but you never now what life will bring. So we built an insulated box that should help protect them from those out of range temperatures. (We haven't been in above 100 degree weather yet, but they have been tested in an 11 hour freezing stretch. So far, so good.) 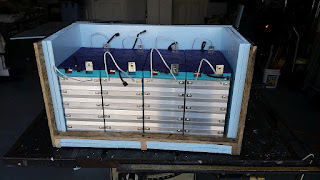 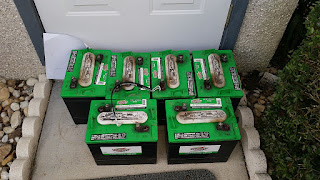 Those 4 batteries above at 140 pounds replace these 6 batteries at 396 pounds and the usable is the same or slightly better.

The EMS is the section in the center of this picture.

Since the Phaeton already had a Magnum 2812 inverter/charger installed, we opted to go with the Magnum PT-100 solar controller. The added benefit, besides dealing with only one manufacturer is that everything communicates with one another and displays on a single panel mounted above the drivers seat.

To produce power to all this we took the solar panels off the previous motorhome, 4 Grape solar 160 watt panels. To this we added 2 HiTech panels rated at 165 watts each. This gives a total of 970 watts of sun power feeding the solar controller. 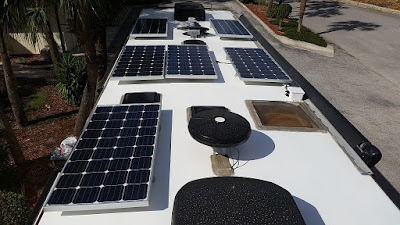 
In retrospect, I undersized the system. Since we have a residential refrigerator, Dish DVR and lots of computer stuff plugged in all the time 400 amps of batteries is barely adequate. Right now, we usually have to run the generator for about an hour in the morning and sometimes an hour or less in the evening. I would be more comfortable with 600 amps. Also, 960 watts of panels will only recharge our 400 amp battery bank on an absolutely perfect day. Those don't happen very often. I would like to add 4 more panels for about 1650 watts total. That would provide ample charging power for those less than optimum days.